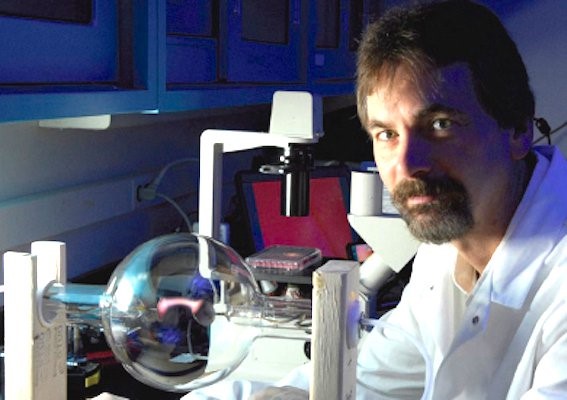 Researchers Demonstrate How Cancer Cells Are Obliterated By Resonant Frequencies

Scientists are using a special device to shatter cancer cells in a lab.

In his Tedx Talk, “Shattering Cancer with Resonant Frequencies,” Associate Professor and Director of Music at Skidmore College, Anthony Holland, tells the audience that he has a dream. That dream is to see a future where children no longer have to suffer from the effects of toxic cancer drugs or radiation treatment, and today he and his team believe they have found the answer.

Taking this phenomenon into account, Holland and a team of researchers wondered if they could induce the same effect in a living microorganism or cell. They came across the work of a Chinese researcher, Dr. Mae-Wan Ho, who conjectured that live cells exhibit similar properties much like liquid crystals do. With this in mind, Holland and his team wondered if they could affect a cell by sending a specific electric signal, much like we do with LCD technology.

After searching the patent database for a device that could accomplish the latter, they came across a therapeutic device invented by a New Mexico physician by the name of Dr. James Bare. The device uses a plasma antenna that pulses on and off, which, as Holland explains, is important because a constant pulse of electricity would produce too much heat and therefore destroy the cell.

For the next 15 months, Holland and his team searched for the exact frequency that would directly shatter a living microorganism. The magic number finally came in the form of two inputs, one high frequency and one low. The high frequency had to be exactly eleven times higher than the low, which in music is known as the 11th harmonic. At this 11th harmonic, micro organisms begin to shatter like crystal glass.

After practicing until they got efficient at the procedure, Holland began working with a team of cancer researchers in an attempt to destroy targeted cancer cells. First they looked at pancreatic cancer cells, eventually discovering these cells were specifically vulnerable between 100,000 – 300,000 Hz.

Next they moved onto leukemia cells, and were able to shatter the leukemia cells before they could divide. But, as Holland explains in his talk, he needed bigger stats in order to make the treatment a viable option for cancer patients. So what kind of numbers did they produce?

In repeated and controlled experiments, the frequencies, known as oscillating pulsed electric field (OPEF) technology, killed an average of 25% to 40% of leukemia cells, going as high as 60% in some cases. Furthermore, the intervention even slowed cancer cell growth rates up to 65%. It was a double whammy.

The team also found success attacking ovarian cancer cells. Most recently, they tested the treatment against the deadly super bug MRSA, an organism that is resistant to many common antibiotics. Thousands of people die every year from MRSA, Holland explains, and the drugs normally used against the pathogen are known to have toxic side effects. Incredibly, the frequency therapy eliminated antibiotic resistance, and researchers were able to introduce a small amount of antibiotic to kill the bug.

Holland hopes that one day the treatment will override the toxic conventional treatments currently available for patients. At the end of his speech, he describes his vision for the future of cancer clinics:

I believe the future of children’s cancer hospitals will be a different place. They will be a place where children gather and make new friends, they probably wont even know they are sick. They’ll draw pictures, colour in their books, and play with their toys, all the while unaware that above them, a beautiful, blue plasma light is emanating healing, pulsing fields, shattering their cancer, painlessly, and non-toxically, one cell at a time. Thank you.

It’s also noteworthy to mention that in 1920 that Royal Rife first identified the human cancer virus using the world’s most powerful microscope. After identifying and isolating the virus, he decided to culture it on salted pork. At the time this was a very good method for culturing a virus. He then took the culture and injected it into 400 rats which as you might expect, created cancer in all 400 rats very quickly. The next step for Rife is where things took an interesting turn. He later found a frequency of electromagnetic energy that would cause the cancer virus to diminish completely when entered into the energy field. The great discovery led Rife to create a device that could be tuned to output the frequency that would destroy the cancer. He was then able to treat the cancer within both rats and patients who were within close proximity of the device. You can read more of that here.